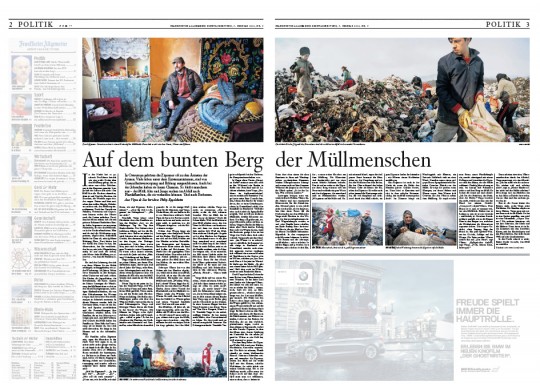 In the beginning of january I travelled to Romania for the german newspaper »Frankfurter Allgemeine Sonntagszeitung«. My collegue Phillip Eppelsheim and I went there to cover another story, but we got a couple of extra days to look around. Maramures, the region where we have been, borders the Ukraine and is one of the poorest and most remote places in the EU. In the city of Viseu de Sus we found gipsy families collecting plastic bottles and metal at the cities dump. We were surprised to see that, because we didn’t know that this poverty is still existing in Europe. We spent two days with these people on the dump. Toxic gas was flowing in the air and one sank knee deep into the garbage. The gypsies get five euro cent per kilo of plastic bottles so they generate an income of about three euros per day. The harassment of gipsies is a common issue in Eastern Europe. The people working on the dump don’t get paid welfare even though they’re entitled to it and most of their children don’t go to school for long. People working on the dump don’t become that old. Almost everybody has liver problems from breathing toxic gases and the chances that one injures himself by grasping into glas, or even worse, injection needles from a nearby hospital, are pretty high.

It’s a bad situation that’s going on down there and it shouldn’t exist in the EU.